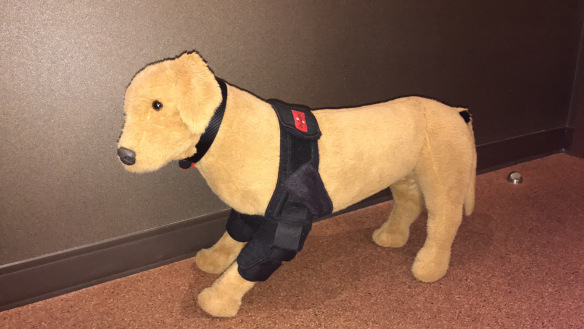 Peep is on day 14 out of 90 in hobbles on crate rest. To catch everyone up here is the story leading up to his diagnoses and treatment; I am super happy we are moving forward again!

One week before we were scheduled to be at AKC World Team Tryouts, Peep came up lame after a training session. I couldn’t quite tell where he was hurting but I cooled him off and put him in his crate. Two hours later he came out of that crate on three legs, holding his right rear in the air. After seeing the regular vet (who suspected knee) and an orthopedic specialist (who suspected, like I suspected, iliopsoas) we went to get an ultrasound in South Carolina with a vet who confirmed a small tear in his right psoas. This tear was small and I set about crate resting and doing therapeutic ultrasound, laser and massage to heal it. After our 2 month ultrasound check up things were looking great and after coming back to Arizona we started some rehab exercises with a canine physical therapist. This is when we found that the left iliopsoas might be compromised using a stance analysis mat, Peep would barely wieght his left rear (even though the initial injury was his right rear). Two weeks into therapy and NO progress was being made and I knew there was something bigger going on.

Dr. Julie Harbo did xrays to make sure it wasn’t Peep’s hips or knees, she did think his back was sore and the xrays showed a bit of a compressed disc.

At this time I went to see Dr. Leonda Armstrong at 4 Paws Rehabilitation in Prescott. She started with a total body exam from nose to tail and concluded that both psoas were not in great shape, his back was sore, but that his left shoulder was possibly the culprit. She and I decided to discontinue rehab until an ultrasound could be done on the shoulder and both psoas.

Although there is a good orthopedic veterinary specialist in Nevada who can do ultrasound and shoulder stability treatment, I decided to fly to Veterinary Orthopedic & Sports Medicine Group in Maryland to see Dr. Sherman Canapp. Dr. Canapp specializes in diagnosing and treating medial shoulder instability.

I spoke with Monica Bush, who also worked on Peep and had similar findings, about her experiences with Squid’s iliopsoas injury and she highly recommended Dr. Canapp.

At VOSM, Peep walked on a gait analysis mat and had a physical exam. Dr. Canapp was not convinced it was the shoulder but we decided to check it out anyway, along with an MRI for Peep’s back and ultrasound on the psoas.

Luckily, the MRI showed some changes but nothing that chiropractic care and rehab won’t fix, the psoas were both slightly compromised and but the shoulder was still in question (the ultrasound wasn’t conclusive). In fact, the ultrasound was so inconclusive, along with the physical and the gait anaylsis not showing anything, that Dr. Canapp wasn’t even sure we should go in and do the arthroscopy on the shoulder. But I didn’t fly across the country for nothing so he agreed to go in and look as well as do stem cell and prp injections for both psoas.

Dr. Canapp called me when Peep was out of surgery and said that when he got into the shoulder it was a mess, with a lot of small tears and affected tissue, he rated it 8 out of 10. They did radiofrequency treatment inside the shoulder as well as stem cell and prp injections.

We spent one day recuperating in a hotel room and then flew home. The first few days were fine, I think Peep was tired and getting his strength back. But now he feels like a million dollars, which is great except try telling a hyperactive Peep Show to walk slowly on a leash in his hobbles to go outside to potty. He wants to tug, jump in the air, do backflips, dig, play with sticks, bite the leash and act like a fool. Day 14 out of 90; it’s going to be a looooooong haul!!!

As they say, it takes a village, and I’m glad Peep Show has such a great team behind him! Thanx to all of you who have helped us move forward!!