Hunda Looney Tunes "Do do do dooooo"

I made the decision to get a Swedish Vallhund based on my love for the long backed short dogs. Hunda was a training challenge to say the least! People told me he was “wild”and “untrainable” and although he was difficult to train I worked really hard at it and accomplished so much! My goals with Hunda were to go to the AKC Agility Invitational and to win Most Versatile Vallhund at the National Specialty. Hunda is a good agility dog, but he does better when jumping in preferred, he is more confident and knocks less bars; therefore he will not be able to compete in the Invitational (there are too many vallhunds who jump championship jump height).

In 2010, Hunda competed for Most Versatile Vallhund at the Vallhund Naitonal Specialty in Flagstaff, AZ. The MVV competition includes obedience, herding, agility and conformation, you can imagine the amount of training it takes to compete in all events. Hunda was SPECTACULAR and ended up 2nd place MVV!

I was so ecstatic and proud that my hard work had paid off! I made up my mind to compete again for MVV and try to win at the 2011 Vallhund specialty in North Carolina. It was a loooong way to travel, and Hunda had to do a harder herding level than he did in 2010. The agility was indoors on carpet and the obedience was indoors on tile and mats. Luckily, I had really done my homework and had competed in both agility and obedience indoors. Hunda tends to get distracted easily so I have to work at keeping him focused. The herding portion of the MVV was first, in the rain, in a waaaay larger field than we were used to, with flight sheep and GRAIN instead of hay to hold the sheep. What did Hunda do after he did a super spazz out run to his pick up? He went and ate the grain. LOL BUT I got him working again and managed to do the test and pen the sheep and although the judge said something about his sharp teeth nipping a bit too close to the sheep we qualified and advanced on to herding and agility.

Hunda rocked the agility, he does really well on consistent footing and focused so well it was awsesome. We were a true team, working together on course! Obedience included both an run in Open and a run in Rally. Rally was first and Hunda did well. Not very many Vallhunds have a CDX, not very many even compete in Open. Hunda had one open leg going into the competition and our MVV obedience score was already set from Rally so the run in Open was for training, practice and icing on the cake if we got it. Hunda was really good! Lost some points for barking but passed everything except the down on recall where he got super distracted and ran straight to me for a perfect recall and sit in front. We didn’t qualify but we were already sitting pretty for MVV and I was happy. At the banquet that night, Hunda was announced 1st place MVV and took home a pile of prizes including a huge ribbon, tons of squeaky toys, a crate with a Swedish flag cover and a lot of treats. I was so pleased that we overcame such huge odds to bring home the 1st place! Making goals is hard, training for them is an interesting process and accomplishing them feels wonderful and strange at the same time!

Hunda recently went to Westminster for the 1st Westminster Master Agility Championship. My goal was to not knock any bars, which meant handling Hunda a little differently than I would my other dogs. Hunda excelled on the indoor carpet and kept all bars up in both runs! He finished 3rd place in the 8” JWW Preferred class! His run in Standard was interrupted by two distracting loops around the chute to stare at the spectators laughing at him. He is such a silly boy! Gotta love that personality, vitality and charm! 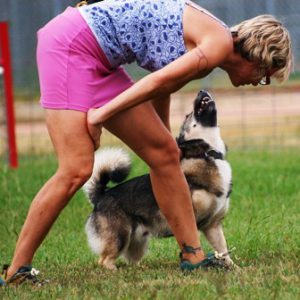 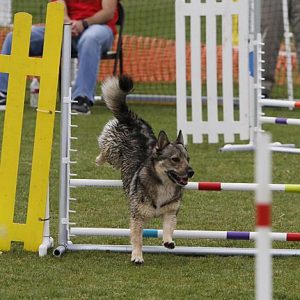